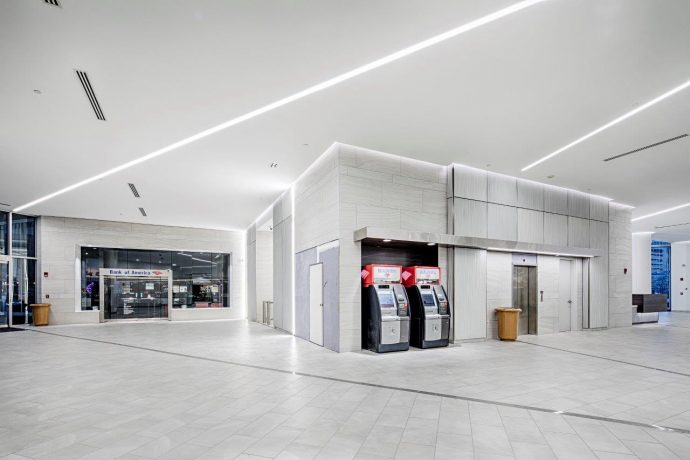 Digging into the multi-million-dollar lobby renovation at 100 S Charles Street, members of the Plano-Coudon project team faced two prime challenges. Working at the base of a 21-story office tower, the team would have to execute structural changes, including the removal of a 300-pound-per-foot steel beam. They would also have to complete the sweeping, 10-month renovation with minimal disruption to people and businesses in a building that housed 1,800 workers.

“I have been working as a superintendent for 35 years. I have done every kind of project, including renovations this big,” said Plano-Coudon Superintendent Ken Zuknick. “This was probably the toughest project yet.”

The lobby renovation was designed to give the building a grand entrance facing the intersection of Pratt and Charles. In addition to replacing flooring, lighting, wall finishes, hallways, tenant space, elevator surrounds, building aprons, the security desk and other features, the project called for creating a two-story atrium and installing a new, wrap-around, glass storefront.

To create the atrium, crews demolished and removed the concrete slab and metal deck of the second floor, then began the daunting process of removing an especially heavy steel beam that conflicted with the storefront design.

“This was the most stressful part of the project,” said Project Manager Milan Devon.

The architect and structural engineer had developed a plan to replace the heavy beam with two pieces of tube steel. The project team, however, still had to devise a way to safely execute the switch.

“Just outside the building, there is a raised paver system which sits on pedestals above the ceiling of the parking garage, and you can only put 100 pounds per square foot of weight on those pavers,” Devon said.

So the project team opted to park a crane further away on a sidewalk and use chainfalls to support the 300-foot-pound beam as they cut away sections and maneuvered them out to the street.

A week before the operation, Plano-Coudon convened a marathon, four-hour meeting with the demolition contractor, structural steel contractor, glazing contractor, inhouse safety personnel, third-party safety personnel, structural engineer and architect “to work out exactly who was going to do what, when and how, the time frames for each step, and what machines were going to be used because we had to check all of that against the weight limits on those pedestal pavers,” Devon said. “And we had the structural engineer re-run calculations to make sure our plan was acceptable and wouldn’t put undue loads on any supporting members.”

The renovation, however, continued to challenge crews in other ways.

A prime architectural feature inside the new lobby was a set of concrete wall panels.

“It’s hard to get a 700-pound panel of concrete hung on the wall as a finished product,” Devon said. “The millworker did a great job figuring it out and now it’s one of the project features that gets the most compliments.”

“Some of this glass is 450 pounds a sheet and you had to raise it up almost 30 feet in the air,” Zuknick said.

The project’s glazier resolved that issue with a relatively new piece of technology – a European-made mini crane outfitted with battery-activated suction cups.

“The crane operator could telescope right up to the glass, activate the suction cups, then lift the glass up into place,” Zuknick said. “The machine takes a little bit of getting used to. Luckily, the foreman’s son used to play a lot of Nintendo so he learned the controls pretty easily.”

With 1,800 workers walking through the lobby every day, the project team had to be especially vigilant about public safety and minimizing inconveniences while also ensuring the renovation proceeded efficiently.

“We started work between 2 and 4 am so we got a lot of the dusty, dirty, noisy work done before 6 am,” Zuknick said. “And we kept the site clean. My laborer knew that we were going to sweep and mop a couple of times a day.”

Crews were especially mindful of keeping construction dust out of two restaurants on the building’s ground floor. They taped plastic over the restaurants’ gates every night and “as soon as they opened the gates in the morning, before the customers arrived, my laborer and I went in and wiped everything down, mopped everything and cleaned everything for them,” he said.

Zuknick visited the building manager daily to update him on construction progress, learn about tenant concerns, and discuss options for minimizing inconveniences. Although hard-wall partitions were necessary around construction areas, Zuknick worked to tailor traffic flow and signage to avoid negative impacts on retail tenants.

“Plano-Coudon put a very experienced super on this project who was dedicated to quality and delivering the vision of the project,” said Brian Hearn, an Associate at BCT Architects and the project’s designer.

High quality, he added, was key to the owner who was aiming to create a bright, contemporary Class A space.

Zuknick “set the tone early that quality had to be at a high level and got the subs to embrace that standard,” said Project Executive Adam Bell.

Some subcontractors exceeded expectations, Zuknick said. The tile installer, for example, meticulously selected and repositioned each striated ceramic wall tile “so that the striations flow from one end of the wall to the other. It looks wonderful in that two-story atrium.”

“We don’t believe in rushing through a project in a cloud of dust,” he said. “We protect the owner’s interest during those renovations by making sure the comfort of their tenants and customers is attended to. We take extra time to communicate and coordinate with building managers. And we’ve shown we can handle complex projects.”