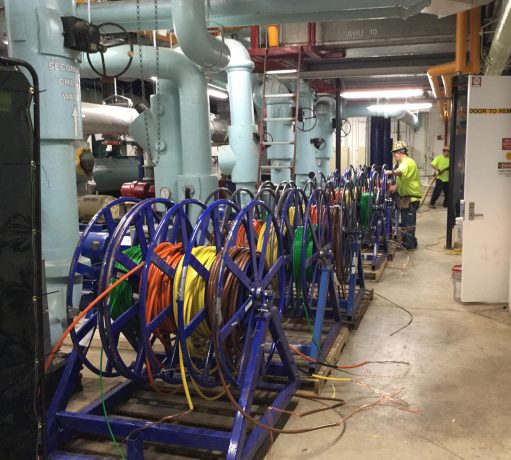 For the project team assigned to the University of Maryland natatorium renovation, it wasn’t your typical summer by the pool.

The HVAC system that serves the natatorium at UMD’s Eppley Recreation Center in College Park had reached the end of its lifespan and was sometimes failing to maintain desired humidity levels during swim meets. So, the university contracted Plano-Coudon to complete a $3-million replacement of the poolpak – a project that would involve sophisticated technology, uncommonly large equipment, limited access, frequent inspections, a ‘fluid’ schedule and daily supervision from a crowd of children attending summer camp.

“It was an intense project,” said Mike Palmer, a superintendent with Plano-Coudon.

Accessing the existing HVAC units posed the first challenge. The university had previously installed two, 10 by 10 foot louvers in the side of the recreation center – one 18 feet above the ground, the other at 36 feet. Removing the louvers gave the project team access to the interior of the natatorium and the mechanical room. However, the site wasn’t conducive to using a crane to move equipment in and out of the natatorium. The crane would have also had to do blind drops inside the building. So, the project team opted to build a scaffold and use a lift to move equipment.

The scaffold, however, left the crew with openings into the building of just four by eight feet. And the HVAC equipment was very large.

“Some of the pieces of ductwork were large enough that I could stand in them,” said Project Manager, Merissa Detwiler.

It took exhaustive planning, but the project team deciphered how to move all of the system’s huge and heavy components to and from the building. The three new HVAC units, for example, were brought in on 48 skids and assembled within the tight space.

The system’s double-walled ductwork was extremely heavy, weighing up to 1,000 pounds per component, Palmer said. It took a five-person crew to maneuver each piece of ductwork “and if we were getting four or five pieces up a day, we were having a good day.”

In the tight space, the crews installing the ductwork had to work overtop of the newly installed HVAC units, Palmer said. “They had to protect those brand new units so they didn’t get messed up while they were hoisting ductwork into place. It was a challenge all the way around.”

Although the natatorium closed for the duration of the project, the Eppley Recreation Center remained open and heavily used from early morning to late evening daily. Once public schools recessed for the summer, the center also hosted a day camp which regularly funneled children to the rock-climbing wall and obstacle course next to the project’s scaffold. That situation required workers onsite to be extra vigilant about their safety barriers and their language.

The project team also had to tailor work schedules to meet university requirements, including extended notices of planned outages, coordination with multiple university departments and near-daily inspections by university officials (commonly referred to as Oscars) who had to ensure that electrical, mechanical, plumbing and other work met contract specifications and quality standards.

“We couldn’t just do one task and keep going,” Palmer said. “We had to make sure the appropriate Oscar could look at that task and make sure it was acceptable before we moved forward. That took a lot of planning.”

“But this was one of the highest priority projects the university had over the summer,” Palmer added. “From day one, we knew we would need to be fluid and adjust to developments in order to deal with the tight timeframe, the complexity of the equipment and the heavy work that had to go into this project.”

The Plano-Coudon team overcame all of those challenges and completed the project on schedule. Sharon Ferguson, UMD’s project manager for the renovation, credited that accomplishment to Plano-Coudon’s meticulous pre-construction work, ability to develop a “plan of attack” for every task and challenge, extensive communication with the university and subcontractors, and willingness to be flexible throughout the project.

“I really appreciated Merissa and Michael for their abilities and their understanding of our needs,” Ferguson said.