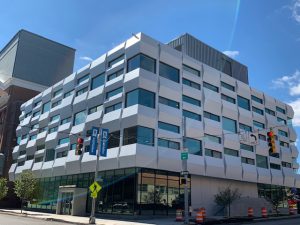 The University of Baltimore’s new Robert L. Bogomolny Library combines the heft of 1960s concrete construction with the delicacy of an angled, four-story glass hall to provide students with a striking, state-of-the-art learning space.

The renovation of the 54,000-square-foot structure, formerly known as Langsdale Library, challenged the project team to master an ambitious and unconventional design, remedy the problems of a 50-plus-year-old structure, and deliver a landmark building within a limited budget. Following several years of close collaboration with the owner, architect and subcontractors, Plano-Coudon completed the $23.8-million redevelopment in time for the start of the 2018-19 academic year.

“This is one of the most challenging projects we have ever done,” said Project Executive Cliff Milstead. “But it created a really impressive, one-of-a-kind building.”

When architects from the German-based firm Behnisch Architekten first assessed the library, “it was kind of mess,” said Architect Matt Noblett. “It was basically in its original state. Not everything had aged well. It was pretty grim inside and very dark.”

The concrete building, however, was made from waffle slab — a ubiquitous technology from the 1960s that is no longer used and was worth preserving, Noblett said. So Behnisch Architekten developed an ultra-modern design to upgrade the original structure with white, angled siding, irregular columns of windows, completely new interiors and the addition of a four-story, angled “Glass Hall” that has sparked some comparisons to the glass pyramid at the Louvre.

Members of the project team acknowledged from the outset that the project would include both known and unknown challenges.

“When you start renovating a building like that, you have to assume you will be surprised, if not shocked, every once in a while,” Noblett said.

Crews discovered that some concrete columns had started to disintegrate, the basement was susceptible to flooding due to outdated infrastructure, and they would have to find a way to work around an enormous steel beam.

“This was probably the largest steel beam that I have ever seen. It was every bit of 80 feet long and 10 feet deep,” said Project Manager Darryl Richardson.

Crews uncovered the beam when they demolished the auditorium that had been attached to the original library. Located on the first story and positioned just 7.5 feet above the floor, the beam would be visible within building’s new, grand entrance at the intersection of the old structure and the new glass hall. It also created a barrier to running pipes and conduit into the glass hall. Project team members revised their designs for running MEP into the glass hall in order to use existing holes in the steel. And since they couldn’t make the giant beam innocuous, they painted it yellow instead.

Building the glass hall itself was the single most challenging aspect of the project. Plano-Coudon, Behnisch Architekten and TSI Exterior Wall Systems collaborated to develop a constructible design. Then Plano-Coudon tailored the construction project for the entire building to meet the unique requirements of the glass hall.

“We ended up closing off that side of the building and only let TSI work there,” Richardson said. TSI – which was the subcontractor for glass hall’s steel, curtain wall and stair – “had to bring in a crane and a couple of different lifts, and they needed lay-down space.”

Work in the rest of the building needed to proceed ahead of the glass hall work, especially while the team awaited the curtain wall shipment from Europe and a glass shipment from China.

“So we built a temporary, insulated wall across that west side of the building so we could seal off the building from outside air and we put temporary heaters on each floor so that crews could work,” Richardson said.

Once the glass hall was constructed, crews removed the temporary wall and rapidly tied the hall into building systems.

The extraordinary collaboration and value engineering on the Bogomolny Library project helped the project team overcome other challenges. Faced with an ambitious design and a limited budget, Plano-Coudon shaved several million dollars off the project’s price tag by locating affordable suppliers for the window systems and the angled-metal exterior panels, value engineering the building’s entire lighting package, developing a cost-effective way of installing 6,000 acoustical tiles inside the coffers of the waffle ceiling deck, and resolving the project team’s search for ways to bring natural light into interior offices.

“Plano-Coudon found a very elegant but very inexpensive glass wall system that we were able to use to frame out all the offices,” Noblett said. “That was a major win because we were struggling to figure out how to maintain as much transparency as possible without spending a lot of money on glass.”

“This project highlights our capabilities,” said Brett Plano. “It involved design-assist packages, an architect based out of Germany and materials from all over the world. This demonstrates our ability to deliver sophisticated projects. In this case for the University of Baltimore, we built a showpiece.”