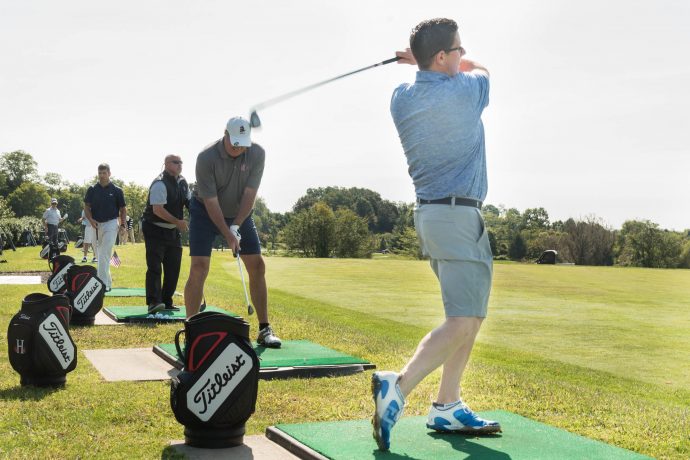 On a day that blended business networking with community service, participants in the annual Plano-Coudon Golf Classic raised more than $55,000 for Teach for America–Baltimore, Catholic Charities and United Way of Central Maryland.

“For the fifth year in a row, we had perfect weather and a very successful event,” said Brett Plano.

Plano-Coudon “served as a convener” to help bring attention to the three nonprofits and encourage people to support them, said Bill McCarthy, Executive Director of Catholic Charities.

“I think Plano-Coudon has this healthy approach that in order to do business in a community, you have to be part of the community and that includes volunteering and philanthropy and working to make the community better. I think they model that beautifully,” McCarthy said.

The mid-September golf outing at Hayfields Country Club enabled representatives of the three nonprofits to “fundraise and friend-raise,” said Courtney Cass, Executive Director of Teach for America-Baltimore. “It helped raise awareness about all three organizations and our work.”

Teach for America-Baltimore, for example, was the largest source of new special educators and STEM teachers in Baltimore City Public Schools this year, and provided one-quarter of all new teachers hired in the city. The organization works to provide broad support to public education through Teach for America’s local network of 1,100 core members and alumni which includes 550 teachers, dozens of school principals, founders of several nonprofits and a few elected officials.

In addition to supporting multiple nonprofits through workplace giving programs, United Way of Central Maryland also now operates several direct-action initiatives. Those include a Family Stability Program that has stably housed 1,258 area families in the past five years, a 211 hotline that connects people in need with essential services, a school support program that provides customized support to struggling children, and the annual Project Homeless Connect event that helps 2,000 homeless and nearly homeless individuals access 150 core services.

“If you participated in the Plano-Coudon event, you should know that every day at Catholic Charities people who are out of work are placed in employment, people without housing are housed, and people who are hungry are fed. And you supported that work,” McCarthy said.

Specifically, Catholic Charities fed 500,000 people in Greater Baltimore in the past year, secured jobs for 1,000 people, provided housing to more than 2,000 seniors and sheltered several hundred people every night. And the need for those services has grown, McCarthy said, due to the slow recovery from the Great Recession and current uncertainties in the country, especially for immigrant populations.

Since the Golf Classic has consistently raised more money each year, “it was appealing to include all three organizations this year,” Coudon said. “They are all best-in-class organizations who address almost every need in Baltimore, so you know your money is going to a good cause.”

For Plano-Coudon Project Executive Jared Geary, the Golf Classic is also an opportunity to leverage his passion for golf to support community groups. Geary leads the eight-person employee committee which organizes the yearly event.

“We insist on creating a first-class event and we keep raising the bar each year so it doesn’t get stale,” he said. “People keep coming to this event and generously supporting it.”