From a Basement Office to World-Class Projects: Plano-Coudon Celebrates 20 Years of Growth

From a Basement Office to World-Class Projects: Plano-Coudon Celebrates 20 Years of Growth 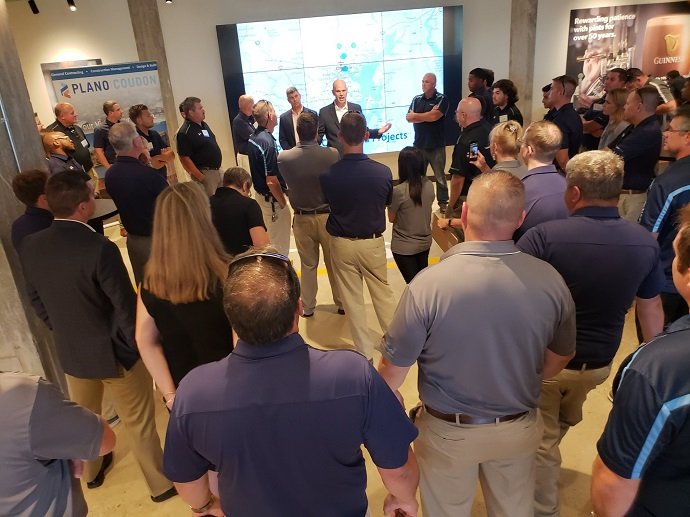 For members of the Plano-Coudon team, gathering at Guinness Open Gate Brewery and Barrel House last week meant more than celebrating the successful completion of a world-class project. It marked how far a two-engineer startup can go in 20, busy years.

Midway through the summer of 1998, Plano and Ryan Coudon left their jobs at a large contractor and formed a new company in the basement of Plano’s Federal Hill row house.

“Our first employee was Cliff Milstead and his desk was literally the crack between the two folding tables that Ryan and I used,” Plano said. “My dog, Bailey, would lie under the tables and bark to let us know when subcontractors came to the door.”

“We were excited about becoming entrepreneurs and we were also scared to death,” Coudon said.  “We literally used our wedding invitation lists for a mailer that we sent out looking for work.”

Although both Plano and Coudon had managed multi-million dollar projects in their previous jobs, their new company had no track record to impress would-be clients. So the new entrepreneurs took on small jobs, competed for lump-sum contracts and won over clients with their sheer enthusiasm. Their first, big wins included a contract to build a new Walgreens Pharmacy and a renovation project at the Women’s Industrial Exchange.

“I remember coming out of the Women’s Industrial Exchange interview and Ryan starts screaming at me, ‘You did awesome!  Oh my god, I think we got that!’” Plano said.

The company broke out of its Catch-22 problems (a firm without experience can’t land contracts to get experience) when it secured a few projects and then an on-call agreement with the University of Maryland system.

“We really leveraged institutional relationships in our early years to create a diverse resume of projects” that included residential, restaurant, classroom, laboratory, office and other specialties, Coudon said.

“By 2007, we were doing more than $20 million in work a year and then we landed a $20-million project – a 215,000 SF cargo shed for the Maryland Port Administration,” said Milstead, Project Executive. “We successfully completed the project and all of a sudden we were a $40-million company.”

Plano-Coudon, he said, has sometimes grown a little faster or slower than desired, but never strayed from its commitment to continuous, thoughtful growth.

“Part of the fun and challenge of this company has always been learning how to take those next steps to advance the company,” said Coudon, adding that he and Plano have always been enthusiastic believers in continuous learning and have always aimed to be a best-in-class company.

“One thing that Ryan and I are very good at is we treat ourselves like we don’t know anything and we talk to everybody,” Plano said. “When we go to conferences, we are almost like the pain-in-the-ass little dog that keeps sitting at the table always trying to get more food. We would go to all the seminars during the day and then at night our mission would be to talk to as many people as possible who were running companies bigger than ours.”

That education combined with a thoughtful approach to strategic planning has generated some bold and successful business developments over the years.

During the recession, company leaders decided they should focus on developing deeper expertise in select market niches in order to be the contractor of choice for clients. The company subsequently launched a highly successful healthcare division which has expanded into the senior living market.  It also created the Small Projects Division (SPD), which now employs 25 people and generates almost one-third of Plano-Coudon’s business.

“Brett and Ryan are not scared to take risks, try new things and see where there is potential to grow the company,” said Jared Geary, SPD executive. “If something doesn’t work, they learn their lessons and move on to the next thing.”

“When you get inside the door, you realize there are a lot of talented people here. We are a stronger company than people might realize,” said Janet Delaney, Chief Financial Officer. “They have very qualified people in key positions and that has affected hiring all through the company.”

Plano-Coudon’s commitment to growth along with its pronounced corporate culture – which focuses on positivity, teamwork, health, family life, community service and a “fire in the belly” to accomplish impressive things – has attracted employees.

In 2006, Adam Bell left a comfortable job for a position at Plano-Coudon because “there was something about this company that made me think I would have regrets if I didn’t give it a shot. Something told me it would be cool to help a smaller company grow into something much bigger.”  Bell is now a project executive, leading the company’s healthcare division.

Realizing that talented people enjoy a challenge, Plano-Coudon has also worked to present staff with interesting opportunities to expand their skills, advance their careers and even grow the company.

When Plano-Coudon created the Small Projects Division, “they gave me the opportunity to take the bull by the horns,” Geary said. “Brett and Ryan are visionaries who saw that this could be successful. So they supported me and they pushed me to reach higher and think longer term.”

The company – which has completed several prominent projects in recent months, including the Langsdale Law Library, Towson University’s residence tower and the Guinness facility – now exceeds $100 million in annual business and is expanding into the District of Columbia/Northern Virginia market.

“I think we have created something special and I’m so proud that we have become part of the fabric of Baltimore,” Coudon said.

“We have this 80-person-strong platform of talented, professional, passionate people to springboard us into the next 20 years,” Plano said. “More than ever, I am bullish about this company. The sky is the limit.”