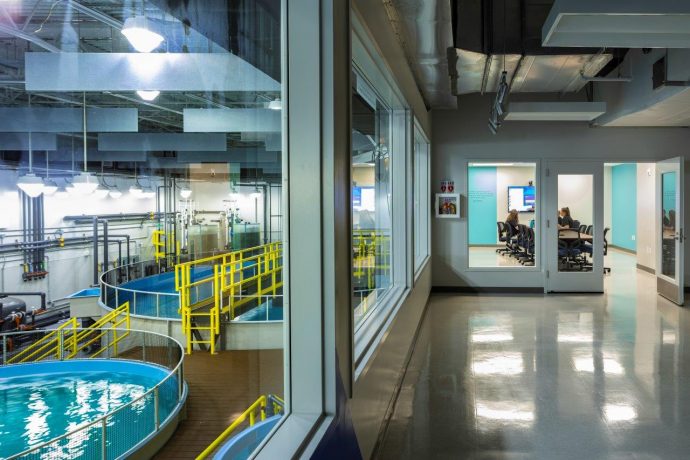 After 10 months of installing leading-edge HVAC and life support systems, assembling aquarium tanks and completing a stunning amount of concrete demolition, a former printing plant in Baltimore is about to become a world-class animal medical care and rescue center.

Plano-Coudon and its project partners are in the final stages of completing and commissioning a 57,000 SF Animal Care and Rescue Center for the National Aquarium. The former newspaper and magazine printing plant near Shot Tower proved remarkably compatible for this radically different use. Designed to hold a printing press and heavy rolls of paper, the building was structurally capable of housing large tanks and support operations. Surprisingly, the need to keep paper rolls very dry meant the building was outfitted with two large HVAC units that nicely fit the need to control humidity in an aquarium facility.

Still, the year-long renovation has required Plano-Coudon and its subcontractors to overcome some challenges. The largest was the construction of a 15,000 SF mezzanine within the building.

All floors within the facility needed to be sloped to drain efficiently. Consequently, crews needed to remove and replace the ground-level concrete floor in the area selected for the mezzanine.

“That concrete floor was anywhere from six inches thick to 12 inches thick,” said Craig Pool, Senior Project Manager. “You normally don’t see a 12-inch slab with rebar on top and on bottom. But that’s obviously what they needed to support the paper rolls.”

To remove that floor, the demolition subcontractor “had three robots, Brokks, operating simultaneously along with a Grade-All, a concrete saw and a couple of guys with torches cutting rebar every day for four weeks. It was just constant demolition,” Pool said.

Project crews also had to adapt to specialty materials selected for the project.  Since rusting is a major hazard in a facility with so much humidity and salt water, the project involved laying a different kind of concrete that was reinforced by fiberglass instead of steel. The design called for the installation of aluminum ductwork that was then tightly sealed with fiberglass insulation to prevent it from sweating. Similarly, crews had to use PVC for saltwater lines and plastic conduit for exposed electrical lines.

The project team also had to develop processes for completing onsite assembly of some core pieces of aquarium equipment.

“We were fortunate that the building came with two large rolling doors. That really helped us get material in and out,” said Michael Junkin, Assistant Project Manager. “But you can’t get a 40-foot tank through a 10-foot door.”

Consequently, several large tanks were transferred in multiple pieces and fiberglassed on site.

The project team also had to augment the building’s HVAC equipment with several additional units, install sensitive life support systems to create unique conditions in each tank to support the needs of different species, and carefully commission all those systems to ensure they generate the needed environment for sharks, fish, reptiles, marine mammals, exotic birds, poisonous frogs as well as the facility’s staff.

Despite the scope and complexity of the renovation, “construction has proceeded very smoothly with no significant setbacks or surprises,” said Linda Vislosky, Senior Project Manager for Capital Planning at the National Aquarium. “I have been particularly impressed with the ease of working with the team at Plano-Coudon. They are genuinely invested and supportive not just in the construction, but in how the building will be used. This is not just another project for them and they assembled a talented team to support the Aquarium’s exacting requirements.”

The Aquarium’s decision to bring Plano-Coudon on board as a construction manager during the design-development phase aided planning and budgeting for the project, Pool said. Value engineering identified multiple opportunities to lower expenses while maintaining or improving the quality of the project. For example, Pool was able to show how to install epoxy flooring (a superior product than the original selection) at a low price.

Such selections combined with an ongoing search for better materials’ prices and the project team’s ability to stay on schedule throughout the year freed up funds late in the project and enabled the team to add some extra features back into the project, such as more sophisticated lighting controls that simulate sunrise and sunset.

Biweekly meetings with subcontractors plus owner meetings on alternate weeks supported thorough communication throughout the project, Junkin said.  A unique characteristic of the project team further aided communication and trouble-shooting.

“Everybody – Plano-Coudon, the structural engineer, electrical engineer, mechanical engineer, architect and owner – are located within a couple of square miles. They’re almost within walking distance of the project,” Junkin said. “Having everybody that accessible has made the project go really smoothly and move faster.”

“In Baltimore, I think we take for granted just how special the Aquarium is and what a world-class institution it is,” said Matthew Herbert, Principal at Design Collective Inc. and architect of the Animal Care and Rescue Center. “People think of the Aquarium as just a beautiful place. But it has far-reaching impact. It supports rescue operations up and down the East Coast for sea turtles, marine mammals and birds. It is at the forefront of animal treatment, rescue and welfare operations. And this Animal Care and Rescue facility will be of a scale and complexity that no other aquarium has.”

The new center which includes offices, workshops and some public space, will also improve the Aquarium’s ability to develop new exhibits. The design includes a “fish maker space,” Herbert said. The dedicated, joint space for curators of the animal populations and members of the Aquarium’s Exhibits and Design Group will enable staff to fabricate and test designs, materials, lighting and other elements of new exhibits in order to optimize the environment for the animals and the experience for Aquarium visitors.